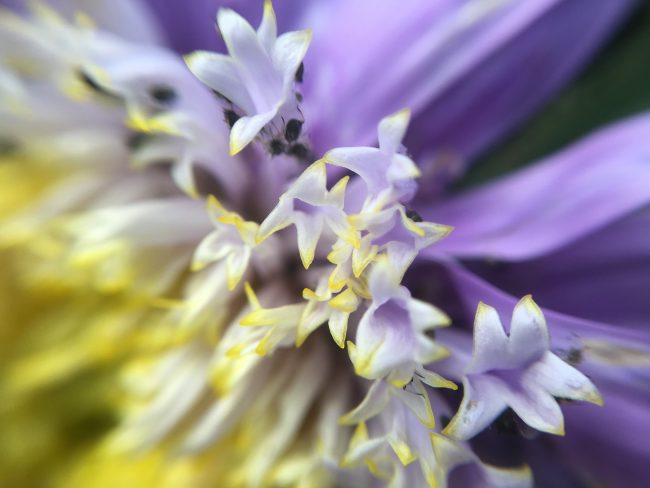 When a Good Bug Goes Bad: A Good Gardener Can Make it Right I recognized this Asian Lady Beetle in my garden by the distinct M (or W) shape on the front black part of it’s body. According to Dr. Ken Fry, this beetle was introduced to North America in 1916 and is no longer recommended as a biological control agent partly because of its impact on native Lady Beetle species. If you have been thinking of buying in lady beetles think again. Photo by Donna Balzer

As usual, when I go away, something goes wrong. This time it’s an aphid outbreak on my potted flowers… especially on the dahlias and nasturtiums. They just get too stressed when I am away  – or is it just that they dry out?! But I know aphids are a problem that will take care of itself once I start taking care of my plants. And it happens sooner than I think. Wasps and lady beetles are the first to arrive. Aphids come in many sizes and shapes and colours. This summer most of the aphids attracted to my dry plants were black aphids. Yikes. Photo by Donna Balzer

And when I see the lady bugs (more appropriately called Lady Beetles) I am excited. Until I tried to identify them and find out that most of the lady’s in my garden are the introduced variety. Not trusting my own beetle identification skills I contact Dr. Ken Fry, Entomology Instructor and well known speaker and insect enthusiast. Gardeners care for their environment from the smallest beneficial insects to the microbes in the soil but sometimes a bug we think is good has some bad characteristics. Introduced or purchased lady beetles, for instance, can displace native bugs of a very similar sort. The best advice to gardeners is to stop buying beetles and start setting up your garden for success. Photo by Donna Balzer

Dr. Fry confirmed: “The insect [shown above] is, indeed, the Multi-coloured Asian Lady Beetle. Also known as the Harlequin lady Beetle or the Halloween Lady Beetle. The Latin name is Harmonia axyridis. It is an introduced species, brought over to North America in 1916. It is no longer recommended as a biological control agent because of its impact on native Lady Beetle species and its tendency to aggregate in large numbers in homes to overwinter. They will [also] bite but not to the extent that it is painful.” Yay! Seeing bright yellow ladybug eggs on the bottom of plant leaves means I have an established colony of lady beetles and do not need to buy  or release any beetles in my garden. Not that I would ever buy beetles. I believe it is better to attract them with the plants in your garden. Photo by Donna Balzer

Yikes. We all know and love lady beetles and children’s rhymes have even been written for them…”Fly away, fly away, fly away home…”  But who knew a positive role model, known to eat aphids in our garden,  could go bad? Like bunnies in Australia introduced lady beetles have become invasive and started displacing native  and local lady beetles! Luckily, says Fry, this bug is not everywhere.  “This species is well established in the coastal areas of B.C., favouring humid environments. It is only rarely found in Alberta (too arid).” Harlequin lady beetle is an introduced insect but once it is in your garden it is hard to discourage. This pair appeared on their own and are making babies. And this means my aphid population is quickly diminishing. Photo by Donna Balzer

Like Starlings in North America, the lady beetles brought in can and are replacing our native species. And well-meaning gardeners are continue to buy bugs and displace our local bugs. It is better to encourage native predators to do the work. Found around the world, the larval stage of Aphidoletes are predators and they eat aphids off plants. This is an insect that looks like a small black midge (mosquito-like in size) when it appears as an adult  in your garden. Photo by Applied Bionomics.

“Lady Beetles are voracious predators of aphids but the commercially available species are generalist predators that will feed on whatever soft-bodied insect they encounter. The implication is that there is no guarantee that the aphids plaguing your plants will be adequately managed by releasing Lady Beetles in your garden,” continues Fry. 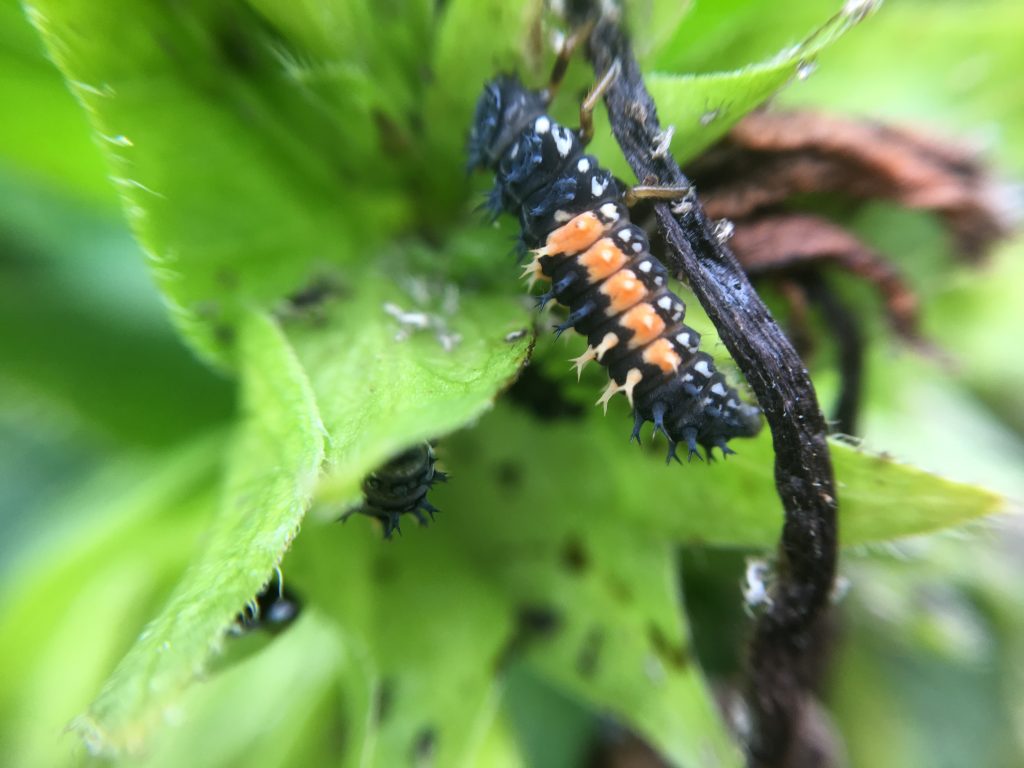 The lady beetle egg hatches into a voracious larva. I have video of this guy eating aphids whole. Photo by Donna Balzer

And Fry confirms my worst fear when he says that the North American beetles released are collected in the wild.  ” Most Lady Beetles are mass collected in the wild and their first inclination upon release is to disperse. Therefore, they are not likely to remain in your yard to feed on [your] aphids on your plants.” 2 Spot lady beetle is one of the many local lady beetles seen eating aphids in a Calgary garden. Photo by George Webber.

So what can gardener’s do about troublesome aphids? First, try to keep your plants healthy. If they dry out or if their nutrients are imbalanced they will definitely attract more pests than if they are kept watered and fertilized. Using an automatic watering system helps and so do some soil amendments like natural mychorrizal  fungi (they actually produce water as they grow and live) and biochar (it holds microscopic amounts of water.) Many herbs such as dill or fennel have numerous small flower clusters that offer pollen to beneficial insects as they wait for populations of pests in your garden to build. Photo by Donna Balzer

Fry also mentions “A better strategy” for home gardeners that want to deal with the problem of aphids on plants but do not want to contribute to the problem of introducing pests or over-collecting  insects in the wild. He encourages all gardeners  “to create a diverse garden with many different plant species (different growth habits (short, mid, tall) [and] different flowering times that will support a variety of predators and parasitoids. While Lady Beetles are a popular and attractive representative of insects, they are not a particularly effective biological control agent.” This wasp is a predator looking for and eating aphids on an aster in my garden. Photo by Donna Balzer

If you are a good gardener you can make a pest imbalance right again in your garden by setting the stage for various predators. Attract parasites like syrphid flys (also called hover flies), lacewings and wasps: they physically eat aphids and other small pests right in your garden. Nectar or protein-packed pollen on plants like alyssum and dill flowers will feed the beneficial bugs while they wait for outbreaks of aphids. Or encourage the tiny parasitoids like Aphid mummies to move into your yard using the same floral bribes and lures as the bigger predators like. Rose de Shanghai light Blue Aster from Floret Farms is new in my garden this year but it was packed with tiny black aphids when I got home from holidays in early August. See the tiny black dots hiding in the petals. More recently lady beetles and syrphid flies entered the scene and the aphids are largely gone in the past two weeks.  Photo by Donna Balzer

Gardeners try so hard to keep their gardens pretty and sometimes this means they consider  importing insects that do little or no good and may even cause harm. The best things for gardeners to do is to keep their plantings healthy and diverse and allow the garden to take care of itself! This lacewing larva is an example of a predator I found in my greenhouse this spring. It was eating aphids and other small pests on my cucumbers. Photo by Donna Balzer