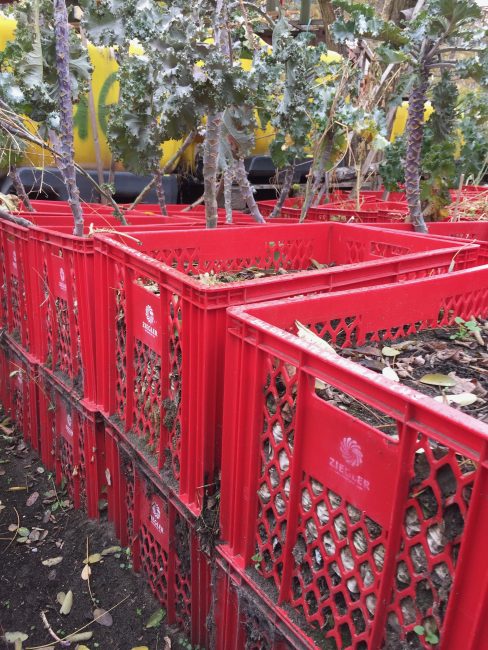 What Can You Learn from a German Community Garden?

What Can Gardeners Learn From a  Community Garden in Berlin? It’s a drizzly day in November and we only have 3 days in Berlin. So of course I want to go to the Prinzessinnengarten (Princess Garden). Google says the garden is closed in winter but it is just a quick jaunt on the U-Bahn (train) from our hotel  so it definitely seems like a risk worth taking. “Maybe we can just look through the chain-link fence” I argue as I discuss this very important side trip with HH (Helpful Husband) who is my partner and travel companion for my roots tour of Germany.

We don’t speak German and it is only our second day in Berlin so we are not experts with public transport. And we are not even sure which way we are heading when we leave our hotel or exactly how far the garden will be from the train stop if we jump off at the right place. So of course we head out.

Imagine my surprise when two stops down we hop off the train and the Prinzessinnengarten is right in front of us. Not the front gate, but definitely the garden. This is the place where six thousand days of volunteer labour are performed annually by various volunteers to raise food on a once-abandoned, city-owned lot. I have watched the videos. I am all in. The gate is open so I walk right in. I see crops growing in milk crates. I see a bicycle wood chipper, and I notice the signs for various activities on site. It is a cold day but it is not raining yet. I am almost ready to leave and then I see them. A group is gathered around picnic tables and someone is speaking. I  sidle over. I give HH the thumbs up sign and he wanders off to see what else is happening in the neighbourhood. I realize the man in the middle, chain smoking and laughing, is speaking English while a lady on his right is translating. He pats the seat next to him, and indicates I should sit down. The site, and much of Berlin, is covered with graffiti. I love the sentiment in this tag in the garden.

You don’t have to offer a dog a cookie twice. I haven’t got a clue who he is, but I immediately and silently sit down next to garden founder Robert Shaw.  He is joking about how at first they thought they could make enough money from selling carrots to pay staff salaries. Not even close, he laughs.

“We make less than 1% of our income from carrot sales,” says Robert (he might have said .01% – I am recording his talk with my phone but the battery dies before it can connect with the cloud so I am paraphrasing here: “Most of the money raised  comes from setting up similar gardens for schools and business’ who want to grow their own fresh food. And that was one of the volunteer’s ideas. We have [approximately 32]  staff  working here now and setting up community gardens for schools and business’ We do the construction and mentor the new gardens along and help with the weekly maintenance. A healthy radish crop is up and growing in November when we visit the Prinzessinnengarten  in Berlin. The chickweed looks healthy too.

When one of the crowd asks how Robert got this piece of property he says the city was trying to sell land to investors and this was such a poor piece of land in an undesirable neighbourhood that they couldn’t sell it. Shaw wanted a five year contract so he could get stability for the garden but the city delayed and demurred until the site gained a reputation and neighbourhood values improved. [From an online article I later read that “In 2009, Nomadisch Grün (Nomadic Green), the brainchild of Robert Shaw and Marco Clausen, leased a patch of wasteland in order to realise their vision of a green space in the heart of the community.  The idea was born out of a trip Robert made to Cuba, where he saw similar spaces where people would gather to work, learn and relax.”] German and English are similar: If I was to guess I think this is where you drop off compostable materials

Robert said that volunteers started coming by during the growing season [because many Berliners at that time were unemployed and rents were cheap nearby so people stopped by to see what was going on and then started coming back to help out.] Media caught on that something special was happening and they reported on the garden and the social progress it was offering to the community.

Suddenly the piece of broken, deserted land Shaw had started working with became valuable to the city and Robert says they tried to sell the land or at at least not to sign a five year contract with the Nomadic Green group.

I later read that  “In 2012 the Prinzessinnengarten faced the threat of closure.  The Berlin Property Fund was tasked by the Berlin Senate to find a buyer for the city-owned plot of land where the garden is based. Nomadisch Grün sought to engage with the Berlin Senate to discuss the future of the project and collected 30,000 signatures on a petition to keep the Prinzessinnengarten open. Thankfully, in this instance the Senate saw sense.  On 14 December 2012, The Berlin Property Fund agreed to return the land to the borough and the threat of closure was averted.” The milk crates are initially filled with new compostable materials like ground up wood waste and then topped up with finished compost before they are planted. These crates can easily be picked up and moved if and when the garden relocates.

Today, with all the media attention bringing in visitors Robert says that the volunteers “feel like animals in a zoo”  so management is  looking at another piece of land to move their garden to. He has his eye on a cemetery, available in the city,  where they could move the milk crate garden. They will continue to garden here at this location but he is not sure how long.  The Nomadic Green also runs a cafe that uses food from the garden and raises additional income for the project.

I eventually ask the interpreter who these people are visiting the garden today. She tells me they are a group of Russian community gardeners on tour. This is just one of their stops. I lost my purse a day earlier so I have no cards to share with the interpreter and no pen for notes and no battery life in my phone to exchange contacts or confirm details of the talk Robert is giving. I am virtually invisible even in my purple coat. I am never properly introduced to Robert but the interpreter tells me he is the man who started the garden so I look him up and confirm his identity from his picture online. I am confused by only one thing and that is the soil. When asked by one of the Russians how they get their soil and whether they add any minerals to the soil, Robert claims they build every scrap of soil right here. If I am understanding what he is saying, there is no soil on the site because it was all paved over when they moved in. There is no soil imported to site because they have no money. So the “soil” we see all comes from the compostable materials dropped off on site by others. They basically fill the double deep layer of space in the milk cartons to about 2/3 full with ground bark and compostables and then use finished compost on the top third. They never add any additional materials. As a gardener I find this incredible and want to know more but Robert insists there is no soil and they add nothing. If I could speak Russian I would finish this conversation with the Russian man who first poses this question. It is possible to grow a garden in compost but plants don’t root as well and heavy plants topple over in wind. There are also nutrient deficiencies in man-made soils that lead to less nutritious food. And this leads to bugs and problems with weeds. At home I grow in a mainly compost layer in my beds and I have had good luck with it. But here I see signs of disease and insect problems. So I am not sure if I would eat a steady diet of food from this garden. I think the bicycle-powered wood chipper is a joke but I cant be sure. I can barely make the wheels turn but maybe one of the volunteers can.

What I learn every time I visit a community garden is that there are so many ways to do everything and this Berlin garden is an amazing example of ingenuity and inspiration. As the rain starts falling the group gets up for the site tour.  HH gives me the signal he is tired of waiting patiently so I edge my way out of the garden. I hate to leave. These are my people. I learned a lot here and I definitely treasure my hour in the garden and wish these anonymous gardeners well. And if I ever get back to Berlin I will visit the Prinzessinnengarten again and try to set up a more formal interview with Robert. He is a man with a dream and from our side of the pond I think he has accomplished his dream and taken many people along with him. Including me.