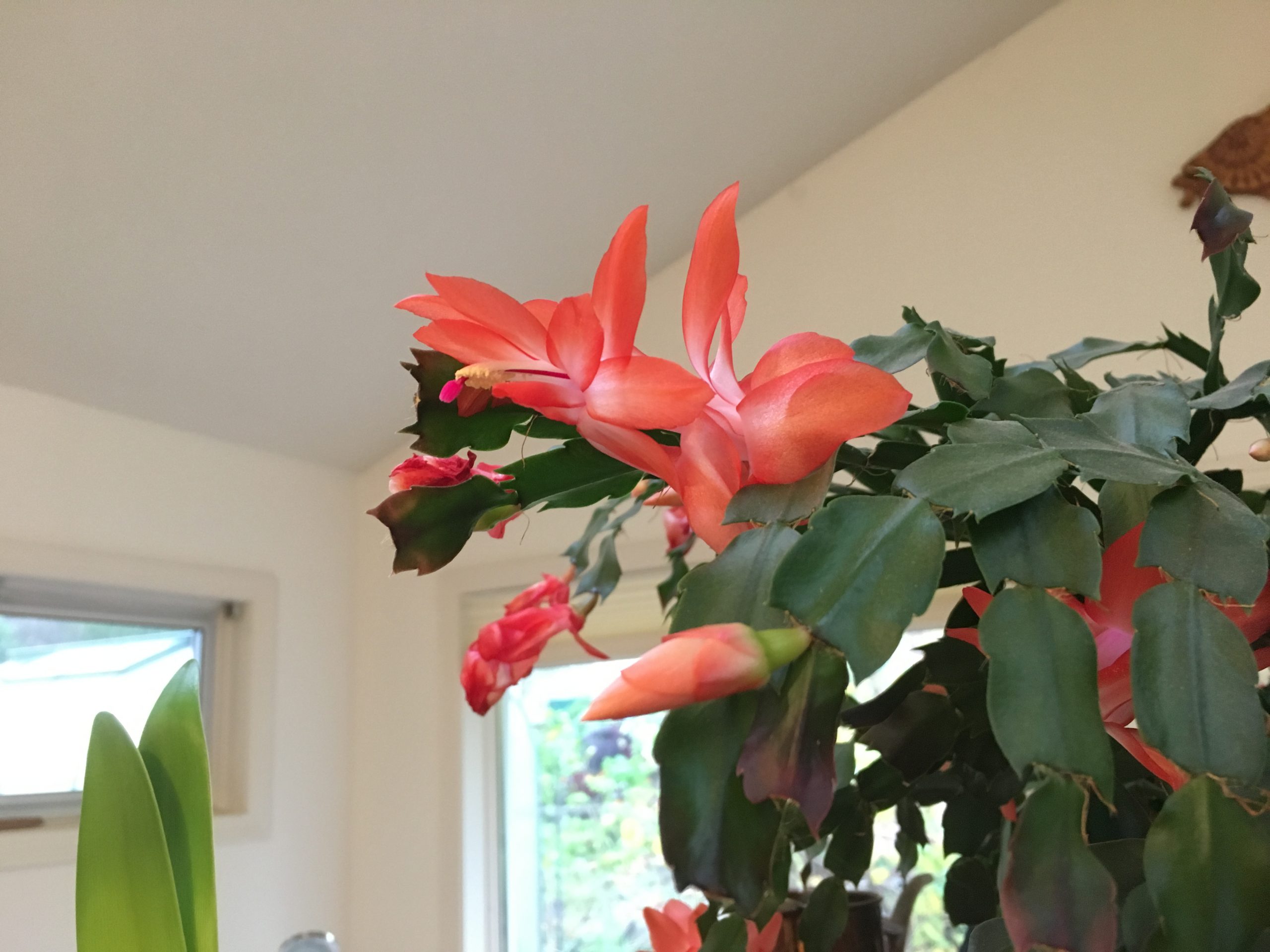 How to grow a Holiday Cactus so it lives 100 Years: Stop Trying

How to grow a Holiday Cactus so it lives 100 Years: Stop Trying

It’s December and I am thinking about my mother. Not because it is anywhere near her birthday (August) or the month she passed (April) or even Mother’s day (May.) I am thinking of her because a holiday cactus she  gave me is in full bloom – again.

If you want a simple easy-care plant to bring joy into your life every fall without fail you want a Christmas cactus, or something similar. Here is the story of my cactus with notes on making more to share with your family. My mother was a farm kid with a grade three education and she was illiterate until my Dad, with his grade 8 education, taught her to read. I am embarrassed to say I told my mom  she had a Canadian accent when she spoke French.  I am not bragging about that. I am just saying kids can be mean. She was raised French Canadian but spoke English to us at home and even learned some German, so mom was the smartest uneducated person I ever knew.  She was short and feisty and she often told us stories of hardship from the dirty thirties. One day, she gave me her old Christmas cactus but for once the plant came with no story, no anchor point because she was on a one-way trip to the hospital. Della was always sharing her stories with her family and was so proud when her first great-grandchild Mali was born in 2004. From left me, my mom Della, my daughter Chelsie and my grand-daughter Mali when she was a baby.

How I wish I could hear Della* tell her stories now, especially the story of the nearly-dead and obviously overwatered holiday cactus she gifted me. But one thing I know for sure is she didn’t pay for it. She probably got it as a cutting from a friend because all it takes is a three to four segment piece snipped off and directly stuck into soil. Each piece roots quickly and seems to live forever. Mom’s plant is still in the same hard garden soil and original pot she gave me so it is possible she moved it from the farm and it could be  forty years old.

I clumsily broke off more than half the plant when I moved it home because I just wasn’t careful with my mom or her big brittle plant.  The cactus gradually regrew and continues blooming every November and December even when I forget to water it for weeks on end. And this makes me think about Mom and how she kept this plant going because she was a child of hardship and she just couldn’t let a plant or even a  part of a plant die. We just weren’t the kind of family who bought disposable plants like Poinsettias or amaryllis every year for Christmas so all we had for seasonal colour  was Mom’s colourful cactus. Segments with three to four stem pieces are pushed into soft potting soil where they root in about a month. If you place the pots over a heat mat they will root faster. Keep them barely moist while they root.

This year as my cactus blooms I take a closer look at the plant Mom called a Christmas cactus.  And I suddenly realize it is not a Christmas cactus at all. It is the more common Thanksgiving cactus normally found at grocery stores and garden centres. Like other cactus there are no true leaves, only flattened green stems. And the stems have pointy parts signifying it is the fall blooming variety commonly call Thanksgiving cactus. Although Cactus usually don’t have leaves, they do have variation in their flattened green stems. The Thanksgiving cactus has distinctive pointy bits on the leaf-like green stems while the true Christmas cactus has rounded stem edges.

Anita Schill tells me the plant I have seen forever in her living room is a Christmas cactus and it is now over 100 years old and fully a meter across.  I have just discovered that my mom’s old cactus is actually a Thanksgiving cactus (thanks a lot facebook and internet) but both plants are originally native to Brazil where they grow on trees, never in the soil. Kind of boring I guess until you really think about it.  Imagine growing up in a tree where your roots can’t reach the ground to root and where you depend on occasional bird droppings for food and moisture from the air and seasonal rain. That is the life a Holiday cactus lives in the wild.

I am grilling Anita. “Does your plant have rounded edges on the flat green stems?” Yes, she confirms, they are rounded. Okay, Anita definitely has the real Christmas cactus.  When does it bloom? “Usually in November and again in February.”  How do you look after it? “Very little water and no fertilizer. I just top up the soil [with potting mix] when the soil level drops.” Anita’s true Christmas Cactus sitting on the stand her grandfather built is over 100 years old and reliably blooms twice every year with no special care.

Schill is animated as we talk by phone about her ancient house plant and it’s history. She got it from her mother who got it from her own mother who got it on her wedding day in the last century – some time around World War 1. Yes, this plant  is over 100 years old right now and 20 years ago, when it was still in its original coffee tin planter, Anita transplanted it.  Let me repeat: Occasionally water, never fertilize and transplant every eighty years.

Enthusiastic about the plant her grandmother Marie Antoinette Blackburn received as a wedding gift, Anita has recently taken cuttings for her own kids so they can share the plant with their kids who will be fifth generation growers of the mother plant. Oh and just to clarify: Anita doesn’t have a piece of the original plant. She has the plant. And the plant lives in a dim north facing window and  Anita only waters the ancient plant “Once in a while when it is crusty dry.”

Anita’s grandfather built an oak stand for the wedding present plant and the plant still sits on the oak stand. Every year it blooms in both November and February, defying the published information that these plants bloom too late to be marketed for Christmas.

This season, when you are looking for meaningful gifts to share with family and friends start with your own story. Find out if there are any houseplants passed down for generations in your family. Talk about them and take cuttings. If you  can’t afford a trip to Brazil, you too can enjoy tropical colour in the dullest months of the year with a holday cactus. It seems from my mom’s experience you can’t kill these plants with drowning and from Anita’s experience they won’t die from old age or lack of water.  Thanksgiving and Christmas cactus are easily passed  along through generations like silverware or fine bone china.

Mom knew I liked plants so when she presented her cactus to me like the world’s best-gift-ever, I accepted it gratefully. And every year when it blooms I think of her and hope wherever she is she has forgiven me for being such a selfish brat. I have grown up now and try to be humble and helpful and I know mom would like that. Have you got a houseplant passed down through the generations? Let me know by responding in the comment section below.

*PS Della changed her name when she was a young girl just off the farm because her mother had named her after the family cow: Alice.