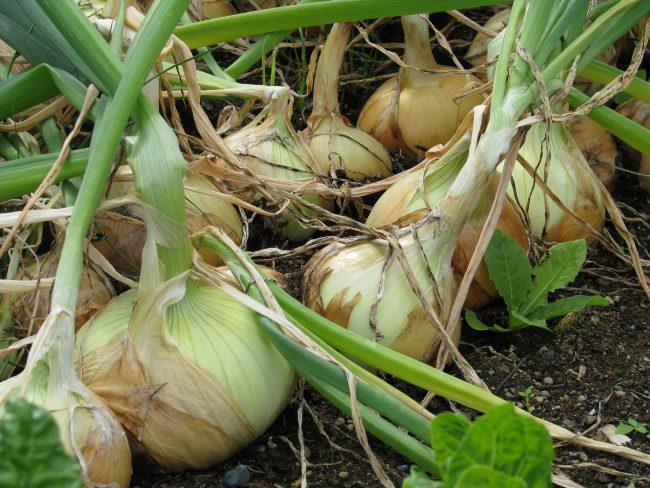 The season for growing onions, shallots and leeks is fast approaching. Al Chomica, a home gardener in Nanoose, has shared his success in this blog post. Personally, I do great with leeks, shallots and garlic but the big white or yellow onions have been smaller than I like and I still have to buy onions for cooking in winter and spring.

Al  shares his onion expertise here in a guest blog… Let me know what you think. I also included info from Calgary grower, Dawn Sharpe, who also does an amazing job with onions. If you are growing in a cooler climate, see the bottom of this article where Dawn weighs in with his timelines and varieties for the prairies. A Young onion after transplanting outdoors and growing on. Each set of leaves equals an onion ring in the root. Photo by Donna Balzer, 2017.

When my wife Bonnie and I moved to Nanoose [on Vancouver Island] from Calgary a few years ago, we found it very convenient to find the local nurseries here carried well-developed, bare root bunches of Walla Walla seedlings, wrapped in an elastic band. They were all cut the same size, wrapped tightly and very robust so it was very easy to use these for our edible crop. Planted in May, they would be ready from late July into September although we found they did not store into winter very well. Then after attending a presentation by Linda Gilkeson at Seedy Saturday, we learned that foreign, deadly virus infections and pathogens can be introduced into one’s garden through the very soil that is found around the microbial roots of these imported onion seedlings.

Since we wanted to be organic as much as possible, we decided to refrain from buying those onion bunches and to start all of our onions from seed. And since we were going this route we could then plan to grow different types of early ripening, sweet flavoured, hot and pungent and even long-storage varieties so that we could have a constant supply of our own onions all year long without ever having to buy another onion from the store – imagine! It is good to have goals in the garden . Al Chomica, shown here pollinating paw paw plants in his diverse and interesting garden in Nanoose, BC, wrote and supplied the text for this blog post.

Our experiment was simple and successful so we thought to share our methods to allow you to grow your own nice bunch of onion seedlings to throw in the ground once it warms up. Get your seeds now and prepare to sow seeds in pots from mid-January to around the first week in February. February 8 just happens to be our calendar date but it could vary by a week or two. At time of writing in January 2016, we have an ample supply of five different types of onions left in storage that were cured 4 months ago. Some will have to last us another 5 months until June 2016 – just when the first of those early varieties will be ready in the garden again.

Another goal for next year is to grow open pollinated onions which will enable us to grow our own viable seed. But for now we order the following onion varieties online:

Our Calendar for Growing Onions

February 8 – Sow the seeds in a small pot with rich compost soil and an organic fertilizer that will feed them for a couple months. Sprout the seeds in a warm location such as on top of a fridge or on a plant starting heat mat. Cover with a trace of sifted soil and watch them sprout. Within a week they should be up and getting ready to unfold their leaves. As soon as they sprout, put them in the brightest location possible in a sunny window or under grow lights. Onions are sun worshippers with tiny leaves and will grow best in lots of bright light. We add a weak mix of 20-20-20 fertilizer at each watering. February 14 – One week after planting, the Allium sprouts are up. They grow in a strange way in that they come out with a bend in them before they unfold their leaves.

February 20 – Within two weeks the onions will be around 5 inches tall. When they get to this height cut them back ruthlessly, to 3 inches, with scissors and put them back under the lights.

March 8 – One month after planting  the onions have had a couple haircuts already and their bulbs will be showing the first signs of thickening. Onions with haircuts in original pots where they were seeded. Photo by Al Chomica

March 20 – Six weeks or so, when the onions are fairly robust, it is the time to start hardening-off the poor little things. Pick a nice warm sunny spot and let them sunbathe outside during the daylight. Bring them back in at night so they don’t get too shocked. The leaves will start to turn dark green at this point and many smaller leaves will die off. This particular batch is ready for another haircut but it is getting harder to keep up as they grow very fast.

March 29 Seven weeks old. These onions are thick and very robust. They grow so much every day it is hard to keep them at 3 inches so they are allowed to grow to 7 inches tall. At this point they are hardened-off and so tough that one could walk on them with little damage.

April 7 At two months of age, these baby onions are about to grow up and get thrown in the ground. The plants are unpotted to show great root development. Look how thick they grew in those pots. They are then roughly torn apart into single plants and placed into holes within specially-prepared onion beds. Given a bit of water they will do well on their own now with little worry from pests or diseases, although wire worms did destroy three of our plants in total. DONNA’S NOTE: If you are trying this in Calgary or Peace River or Sherbrooke where snow is still on the ground, you need to find a spot in a greenhouse if you plant this early outdoors. Better yet, put a row cover over your newly planted onions in your greenhouse. If onions get too cold once they are this size, they will simply burst into flower once the season warms up. Check out Dawn Sharpes timeline below for cooler climates. Al Chomica photo of onions ready to transplant in April.

May 8 One month after planting (outdoors in Nanoose), all the onions are busy establishing their roots and are just about to start forming bulbs. June 20 Two and a half months after planting outside, the first of the early Alpines (or Norstar) are ready and perfect for eating. The long-storage onions like White Wing won’t be ready for at least another two months but they will keep until June of next year, providing us with a full year’s supply. Early varieties like Alpine and Norstar are ready to eat two months after planting. Photo by Al Chomica

Our onion beds are relatively small and each variety gets a six-foot long raised bed of its own.

Planting Guide by Al Chomica shows how he plants onions outdoors in his 20″ wide by 6 ‘ long beds.

DONNA’S NOTE: From illustration above you can see Al puts in two rows of onions, each 2 inches from the outer edge of the row and about an inch deep along the six-foot-long row which is 20 inches wide.  The spacing between each onion is from 2-6 inches depending on the ultimate size of the onion. Smaller onions like the Norstar only need 2 inches between plants while the Kelsae needs 6 inches between each plant.  Al can plant 72 of the smaller onions in his 20 inch wide, six-foot long rows or 24 of Kelsae in the same space. Al also layers fertilizer in a 4-inch wide trench in the center of his 20 inch wide rows all along the length of the row. His method reminds me I always skimp on fertilizer and onions are heavy feeders. 2018 Promise to myself: add an extra batch of my Complete Organic fertilizer to my onions this year. Big onions are heavy feeders and often spoil in storage. Photo by Donna Balzer shows one of her tiny onions beside one grown with tons of fertilizer by Eddie of Eddies Wholesale in Langely BC Another Onion Idea! Tanja Pickerell, Nitty Gritty Farm in Cedar, BC,  prevents onion maggots from getting into her crop while they grow by covering them with this pop-up, fabric-covered hoophouse. Photo taken by Donna Balzer, fall 2017. Dawn Sharpe shows off one of his Calgary-grown onions in fall. He starts his onions mid-March in Calgary, Alberta when the weather can still dip below minus 20 degrees Celcius. Photo by Chelsie Anderson

At  risk of making this onion article too long I am adding information received by email and by telephone from Dawn & Susan Sharpe in Calgary, Alberta (Zone 3, Calgary, Alberta high elevation garden.)

“Onions are a passion of mine, we start from seed in mid-March in a hot Greenhouse, and by April 1 they are up and moved to a cool Greenhouse on upper shelves using only sunlight to grow. Because in Calgary it can  be very cool – down to minus 20 – we use electric heaters just to keep frost off for a month.  We have also installed a redi-mate thermostat soil warmer and  buried it  2-feet deep in the soil in the greenhouse beds. We turn that on in early March to thaw the frozen soil in the greenhouse beds.”
Dawn plans to use a gas heater for his new greenhouse – in design right now. The gas heater is a Modine brand and it will be cheaper than electricity to heat his houses in the early spring and later fall. It is all thermostat controlled. He hopes to install a pipe around the floor to distribute the heat, because heat rises. Dawn suggests fans, lots of fans, to keep air moving even if you are just using electrical heaters. This stops cold spots and prevents extra humidity from building up.
Onion Varieties Loved  by Dawn & Susan in their Calgary Alberta garden:
Most of the above have long term storage potential (LTSP), if dried/cured and kept in the dark., most are 120 days or under but
the shallots are earlier – we give these away as Christmas presents the friends that cook -they are easier on ones stomach than onions.
Some of our onions are naturallly big, but you could harvest early. They are all heavy feeders and the roots will exceed 18 inches in porous soil, we use perlite and lots of compost.(Dawn makes his own compost and has a mineral-rich clay soil)