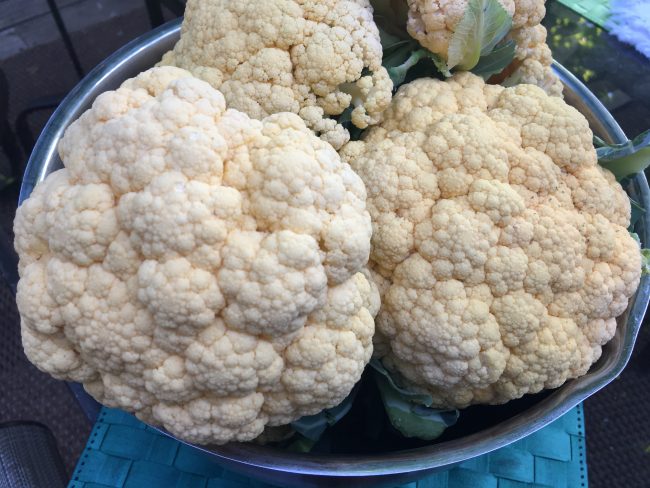 Bred to sniff food – specifically truffles in the soil, our dog Corle has shorter front legs so her nose is close to the ground as she runs through the woods. This trait has helped her find potatoes in our grow bags. Imagine my surprise when i dig potatoes and find old dog bones instead of spuds! Luckily she is adorable so I never get angry with her.

LIKE LABRADOODLES, plants that have been deliberately cross-bred are expensive to buy. A cross between a Labrador retriever and a poodle is carefully made to generate  really cute puppies. And a cross between two specific cauliflowers gives you the seed for a potentially better plant – something that is ready sooner or something that is purple instead of  white. Graffiti cauliflower is an F1 hybrid created by crossing known parents to create a purple strain. It looks and tastes like cauliflower but I find the colour off-putting. A hybrid is not a GMO or GE food. It is not engineered with cell manipulation or with addition of cells from another creature. Instead it is the staged crossing of genes from two individuals. You pick the traits you like in a dog or a cauliflower and facilitate the transfer of those genes with controlled breeding. By facilitate I mean brining the adult dogs or the right plants together at the right time.

This is a good thing because you know exactly what you will get with hybrid seed or cross-bred puppies. You know how the seed will perform in your garden and what traits the puppy will have.  If you want a purple cauliflower you want a hybrid called Graffiti and if you want dog that won’t shed, you want a Labradoodle or it’s pre-cursor, the Lagotto (picutured above and below.) Corle looks like a Labradoodle but she is actually a pre-curser to both labs and poodles known as a Lagotto, She is historically a street dog from Italy used over centuries to dig truffles from the soil. Many of her features, such as non-shedding curly hair and gentle personality,  are passed on to the more recent and better known breeds like the poodle and the lab. In the plant world Corle’s breed is a land race or heirloom. Poodles are a selection of Lagottos and Labradoodles are like a hybrid between two selections (Poodles and Labrador retrievers).

I have known and grown many types of cauliflowers and I can attest that the hybrid varieties are more consistent and perform better for me. They have specific characteristics and you can usually count on them to perform the way they are supposed to perform. But because of the extra work needed to make the plant crosses, the hybrid seed is considerably more expensive than the heirloom  or open pollinated varieties. Also if your soil is dry or if it is too hot or if you fail to plant cauliflower where it will be shaded mid-day it may “bolt”. This is the problem both Lennie and I had this spring when it got too hot and I neglecting my watering duties. Like labradoodles, hybrid cauliflowers are expensive. Someone has to keep the bees away from the plants when they flower so that only plants with specific traits are allowed to share pollen. People carefully cross-pollinate the desirable plants by hand to make sure the plants with traits you like are carried forward. This is done every time the seeds are sold and the results are called an F1 Hybrid. If  a plant is an Heirloom or Open pollinated variety of cauliflower (or any other plant) it produces an approximate replica of itself but if it is an F1 hybrid it produces a plant with known traits.

Here are some cauliflowers I have known and grown:

Snowball OP (open pollinated) – Price 3.29 per gram. Plants seeded at various times from March 17 to April 24 over the last three years. Before I can pick them the heads are loose and ricey, not compact and firm. This means the stems are emerging from the head and while they are still edible, they are not compact.  I will not be growing this again now that seed packet is all used up. Some cauliflowers get “ricey” soon after they are ready to eat. This trend is more possible in OP (open pollinated) varieties.

Galleon OP – I bought these last year and accidentally planted them as a spring crop. They simply got bigger and bigger and never formed the tight heads I was expecting. Then I read the fine print. This variety needs a cold period before they will bloom. They are best started in summer and overwintered in a cool greenhouse. Then they will  bud in winter and make lovely heads in January through March. I feel bad about wasting these seeds and will have to start them again this fall. I never got a head on my summer grown Galleons. I will have to try again as a winter crop.

Snow Crown F1– This hybrid formed beautiful heads last year in July but  this year they bolted and made  smaller than expected heads in June. I will seed it again for a fall harvest outdoors and try it again this summer. One of the professional growers I know at the Farmer’s market has been growing this variety for several years because it is so reliable. Sadly, more than half her crop this spring was tiny heads. There was definitely something different about this spring. Too hot and dry. Snow crown is usually a reliable variety but when grown outside you have to be so careful to give them moisture, shade and nutrients to keep the heads uniform in size.

Minuteman F1 – Listed as the best variety for all-season use by organic grower William Dam seeds. This kind is more versatile than other whites grown outside because it tolerates warm as well as cool temperatures . I need to try it again again in 2020 but I forgot to order seeds for it this year. Cauliflowers take a lot of room in the garden and can prefer a 4′ x 4′ area to really reach their size potential.

Susana  F1– Bright lemon-green heads firm and at least ten inches across in my garden. This one was a first place prize winner at last summer’s regional fair. Reliable producer both outdoors and inside the greenhouse. Planted last twelve seeds this week in the greenhouse for a late fall and winter harvest. Super nice with white cheddar cheese sauce or roasted in the oven with garlic, herbs and olive oil. Susana has been very reliable in my garden as a spring and summer grown variety. This one is harvested November last year

Graffiti F-1 – Purple heads on compact plants. Lovely but the colour seems wrong and I couldn’t bring myself to cook it. (see purple cauliflower above)

Veronica F1 – A Romanesco type I saw at a farm market in Italy so I really had to try it. -It was very unusual for me – tried it for the first time ever in the greenhouse this year and they were delightful and so pretty. Seeded my last twelve seeds this week in greenhouse for fall harvest. Veronica waiting to be cooked in the kitchen. A yummy and beautiful variety I grow in my greenhouse

Cheddar F1 –  A bright orange variety that tastes as good as it looks. But the price! I decided to try something in the same colour range but cheaper so last year I grew Flame Star F1. A big pile of orange cauliflower from my garden. Both Cheddar and Flame Star look the same in my garden but Cheddar cooks up better for me.

Flame Star F1 – A very successful grower but did not store well and heads turned yellow when steamed so looked washed out. Quickly went mushy if cooked a minute too long. Flavor also a bit off – like sulphur? Not a good thing so did not re-order.

There are so many kinds of cauliflower and I certainly have not grown them all.  I suggest you check catalogues and try what you can. Remember the F1’s are more work to make so are usually more expensive.
I recently completed an article about the benefits of growing Cauliflower in the greenhouse for  the BC Greenhouse Builders blog (more reliable yields, longer season of growth) and I realized it would also be a great benefit to include information about the varieties I grow or  know. This article is an addendum to the article on the BC Greenhouse Builders Blog. Corle  with her short front legs in her native habitat – the deep woods.