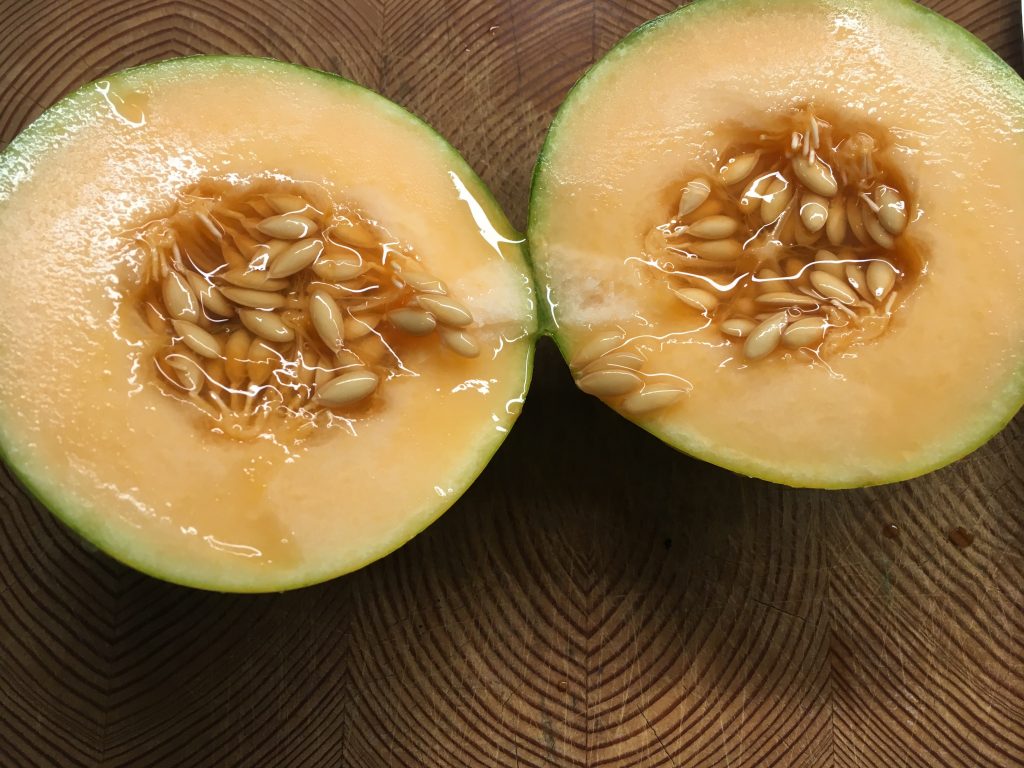 Growing Cantaloupe on the Prairies and West Coast

“We were amazed at our success with melons and the unbelievably good taste and juice running down our arms as we ate!  I still dream about them!” Margo, 2019

Homegrown Cantaloupe are nothing like what you are served at Sunday brunch in a big hotel. Instead, they are an amazingly flavourful fruit that grows in Canada – with a little forward planning. I used to live on the Prairies and now I live on the west coast . Both climates are considered cold. The prairies because it freezes both late and early, and the coast because it can be cool near water well into July, even if it doesn’t freeze at night.

And after trying  cantaloupe in 2019 Margo wanted to know more. It probably seems too early to debrief the growing season that was but honestly? This post explains some of the ins and outs of growing  sweet melons  because before you know it the time to order seed for  testing and tasting  in 2020 will be here. Home-grown cantaloupes are a delicious treat in the late-season whether you live in a mild climate or in a changeable prairie garden.

Margo gardens just northwest of Calgary, Alberta and she planted  3 varieties of cantaloupe this year. Her main consideration was finding early maturing types and she did find three varieties  listed at or just under 70 days. This may seem silly. After all Calgary usually gets 112 frost free days. And in Qualicum Beach we get at least 150 days frost free. But the actual IDEAL growing days may be quite a bit shorter. Melons love heat so those borderline days with cool rain in September or late chills  in June cut into growing time. And many melons are listed at 85, 90 or even 100+ days from seed to maturity.

“I planted Fastbreak and Goddess indoors on April 29.  I bought the Earlichamp seeds after that so they did not get planted indoors until 2 weeks later. Since the plants were pretty small when transplanted, they were behind the other 2 varieties so that probably affected how mature they were when we had to pick them because of frost [in September].” Off to the fall fair: Flower Dragon watermelon, red Kuri squash and Earlichamp cantaloupe in Qualicum Breach on August 4 in 2018.

On the west coast my Journal says I started all my sweet melons on April 26th in 2018 and because that worked so well, I started them again on April 27th in 2019. The varieties I started included Earlichamp cantaloupe and Sweet Beauty Watermelon and on August 30th 2018 I made a note in my journal to write about Earlichamp because “it was so sweet and delicious!”  I also started older seeds I had been hanging on to from Baker Creek seed but I have nothing to report there. All the older French varieties I tried were too long-season for me and did not produce much fruit in my north-sloping garden.

I also grow watermelons (Jade Duchess 2017, [award winning] Flower Dragon 2018 and Sweet Beauty 2019.) Next year I am going back to Flower Dragon. No more fooling around – this one was just so early compared to the later and smaller types I have tried. A winner in every way and so many watermelon salads and breakfast watermelon dishes.  Long after the plants  were harvested from August to September we were eating the sweet fruit until late October. Flower Dragon watermelon was simply the best watermelon in my cool coastal  garden in the past three years and I will grow it again in 2020.

For melons growing in cold Canadian climate starting them indoors or in your greenhouse about a month before you plant them outside. I start mine in late April over a heat mat in my greenhouse. Margo starts hers indoors on April 29.  When the small plants have two or three true leaves they can be carefully planted outside in deep compost-rich soils. If your climate is unstable {read Prairies) then provide some wind and frost shelter for them for the first week or two after planting. If your climate is generally cool (read close to the ocean) then the same advice applies. Shelter your plants until they are well established or at least until they start blooming. With just 2-3 leaves, melons are ready to be planted into warmed soil outside after danger of frost is past.

In both cases I cover young plants with floating row cover  (Agribon 19) to trap in extra heat and keep the small plants growing quickly. If  soil is rich there is no need to fertilize but if you have problems with mildew or disease you could be low on micronutrients. It is super easy to add a handful of kelp meal for micronutrients and of course I love worm castings so I usually add those to the soil at planting time as well. I keep the cover on until plants are blooming so that I keep the heat in as long as possible.

“We had so much rain that the melons started to mold on the bottom.  We tried setting them on a variety of containers to keep them off the ground and hopefully drier. Do you have any suggestions for keeping the melons off the wet soil if there is a lot of rain?  That was our main problem this year.  A lot of the melons started to rot where they touched the soil.”

When the season is cold and wet It is a common thing for growers to set squash and melons on a thick layer of straw as they start to bloom and make small fruit. Margo was creative when she set her fruits up on containers. Good idea. I have also used IRT mulch directly on the soil and below the plant. This is a fine, thin plastic layer that warms the soil when it converts sunlight to heat. The plastic  also keeps the melons dry but in really rainy spells you might have to add straw on top of the mulch. So I suggest Margo  use a thick layer of straw, applied once the plants start blooming or install IRT mulch before planting. This year I built a cattle panel trellis and I plan to run my melons up the trellis to keep them vertical and this will keep the leaves and fruits dry so will minimize mold. See the video I made about installing the trellis HERE. My Earlichamp was the only cantaloupe entered at the Fall Fair in Coombs in early August 2018 so of course it won a ribbon. It is a variety worth trying if you live in a cool climate.

Initially I grew melons and squash right in deer country in my front yard. The young deer gradually tasted and tested the crop and finally discovered it was an unusual treat. I can only grow melons and squash in the front yard now if I go to the extra effort of keeping them under row covers. This is a pain because I have to remove the covers during the day to ensure pollination. Check out my video about this from last year.

Fastbreak – from Lindenberg Seeds – Margo picked these from the seed catalogue because they were an early variety.
She said they very prolific, exceptional tasting, small melons (about half the size of the other two), and didn’t keep as well as the other varieties.  “However, since there were so many, we didn’t get all of them raised off the ground so more of them started to spoil where they touched the soil.”

Goddess – from Stokes Seeds, William Dam Seeds- “We have planted [these] before with good luck – [they are] our favourite from previous tries. These are still a favourite – large size, exceptional taste, kept the best (we ate the last of them at the end of Oct.)

Earlichamp – William Dam Seeds, Westcoast Seeds and off the seed rack at the nursery. (Margo says “[I] Tried these because I didn’t have enough Goddess seeds left from last year and I didn’t want to place an order with Stokes. Similar to Goddess – in size, Good taste, but didn’t keep as well – but probably because they were not as mature [remember they were started later.]”

Other Options:  Charentais Melons from  Baker Creek Seeds and the closely related Petite Gris de Rennes Melon are both 85 days to maturity but  the catalogue indicates they tolerate a cool season. This type has been well-reviewed on the west coast by other gardeners but, again, 85 days is a fairly long season. At least one person commented on Facebook that  the female flowers didn’t start until later in August. With coastal rains starting early in September this didn’t give much time to grow before harvest. See note above: In 2020 I will be trying Rubens from William Dam seeds. Growing a cantaloupe in a greenhouse like Garth in Mill Bay allows you to grow more varieties. Next year I will grow my melons on my new vertical garden outdoors, the Cattle Panel Trellis. I have not grown them in my greenhouse because I have plenty of luck with short season varieties outside.

Next year? Yes I will try the short season variety Margo likes (Goddess) but I have learned from my watermelon experiment not to throw out the baby with the bathwater so I will continue to grow Earlichamp as well, As a nod to facebook friend Riki I will try another French Chartenais variety even though I have failed with these long-season types before. Riki loves her Petite Gris de Rennes and has luck with it on Vancouver Island so I am going to a French variety.  William Dam lists Rubens Hybrid at 62-65 days to maturity and the catalogue says it is the earliest Charentais [French] type available so I will give it a try.

And Margo? She says she will try her favourite melon Goddess again and as a comparison she will also try Earlichamp once more. She will put mulch under her melons and hope for less rain and a longer season. And we will both do better because every gardener knows “everything is always better next year.”