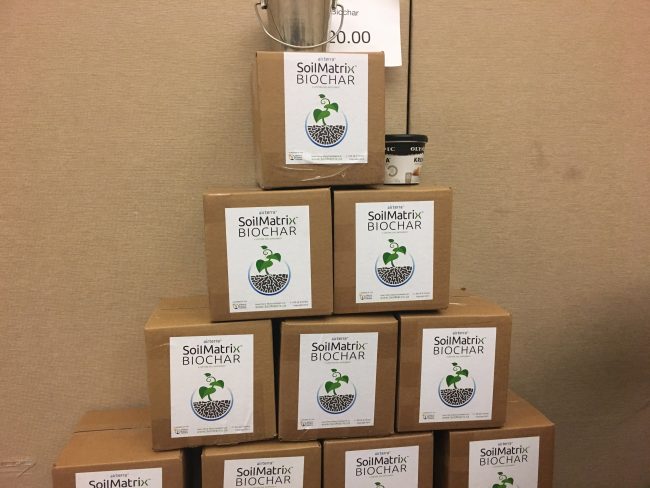 Biochar for Home Gardeners in Canada

Robert Lavoie was a busy engineer in the oil and gas sector when a member of his church gave him  a piece of paper with one word: Biochar.  He didn’t know it then but biochar is a friend of the garden and  a positive addition to soil and environment. It’s there when you aren’t even thinking about it and it helps you get the best veggie garden ever. Permanently. So after a bit of research Rob was hooked.

“I’d love to see well-built biochar all over the place – but we are not there yet,” said Rob while we were chatting about all the various products on the market being sold as biochar. “What’s black is not necessarily biochar!” Airterra Soilmatrix Biochar is Robert Lavoie’s biochar brand and it meets the requirements and is certified by the Canadian Food Inspection Agency because of its consistent and reliable properties.

Biochar is an ancient product and Rob didn’t invent it. He just made it better and more consistent and commercially available to home gardeners. And suddenly, because Biochar is a recycled product, an antidote to global warming, and a permanent water and nutrient-holding addition to the soil there is so much interest in this cool idea. Like co-housing for microbes, biochar is becoming popular as a way to improve your soil. Research is ongoing and biochar is now being used for Hydroponics, traditional gardens, farms and as feed for livestock. But is it as simple as using fireplace ash  or burning waste wood? Not quite. Airterra Soil Matrix Biochar – on left. It is a specified particle size. It also includes a small percentage of ash so there is a small mineral charge available when it is added to the soil. On the right is a sample of my compost ready to add to the soil or to the biochar.

Thousands of years ago people living along the Amazon river in Brazil discovered, made and used Biochar. Remnants of this historically used char is still found in the soil where it was fist made and used. Instead of relying on shopping at Lowes for compost, Amazon farmers made their own soil amendments from forest trees, food waste and human waste. Instead of slash and burn agriculture, trees were slowly burned, the oxygen was blocked,  and carbon was preserved and later used as a soil amendment. (Trees were buried in soil so the lack of oxygen made the fire smoulder instead of burn fast.) The tiny black rectangular particles in my greenhouse soil are the fragments of incorporated Airterra Soilmatrix  Biochar. Tiny particles like these have been found in Amazon soil where they are still boosting soil and land arable 1300 to 4000 years after they were applied  to improve soil.

BIOCHAR IS A FINE-GRAINED, HIGHLY POROUS CHARCOAL SUBSTANCE THAT IS DISTINGUISHED FROM OTHER CHARCOALS IN ITS INTENDED USE AS A SOIL AMENDMENT…. [IT HAS] A HGH SURFACE AREA PER UNIT OF VOLUME AND LOW AMOUNTS OF RESIDUAL RESINS. Josiah Hunt, The Basics of Biochar

We are still making biochar but the way we do it now is different. With today’s technology we are able to separate methane gas produced during combustion. On his web page Rob describes a side advantage of how methane separation is making life easier for women who cook on traditional wood stoves in Africa. Instead of burning the wood to cook their food the women create biochar in special stoves and use the methane gas given off to cook dinner. Then the biochar is sold to farmers so in effect, the wood is used twice.

In Finland, Australia, Canada and around the world sophisticated equipment is now used to create both small batch and large batch biochar in both stationary plants and in mobile units. Today there is no need to waste wood. The technology is available to heat at temperatures at or above 500 degrees Celcius, withdraw the methane for other uses, and process the particles to a size ideal for holding nutrients and soil microbes. Gardeners are always looking for ways to improve the plants in their care. Using biochar improves plants and the world as a whole.

Biochar in the Home Garden:

My first experience with biochar was after a trip to Walmart. I read The Biochar Revolution: Transforming Agriculture and Environment , edited by Paul Taylor, PhD.  but I was not interested in burning my own waste carbon because of the complexities and the possibility of polluting the environment with poorly constructed, methane-emitting equipment. Instead I bought lump charcoal at a big box store and tried to crush it at home. That was my first mistake. At that time I didn’t realize how hard this lump charcoal is or how many  dangerous residual resins are attached to the carbon. I tried to crush lump charcoal from a big box store the first time I wanted to try Biochar. This was difficult to do and it created rather random sizes of charcoal.

CHARCOAL BRIQUETTES ARE MOSTLY MADE FROM DE-VOLATIZED COAL AND CONTAIN CHEMICALS THAT CAN BE TOXIC TO PLANT GROWTH AND SHOULD NOT BE USED IN SOILS.  McLaughlin et al 2009

Later I paid for the shipping and received a “free” sample of Biochar from a relatively new manufacturer in British Columbia but was uncertain of the results and couldn’t track down the supplier for more info. Finally I heard about Robert Lavoie and his work with Biochar in Alberta. Now I had a reliable source  and a credible advisor in Rob so I jumped in full time with 8 boxes of product on my first order. I have been using Airterra Soilmatrix Biochar in my garden and greenhouse for four years and am very pleased with the growing results.

Prepping Biochar for Use:

My  mistake with the crushed lump charcoal was particle size and unknown resins. My next mistake with better quality commercial biochar was that I dumped the biochar right into my very deficient sandy soil. Biochar is good but it is not a miracle worker. All the plants in the second trial eventually died from either drying out or nutrient deficiencies. Biochar can hold on to nutrients but first there have to be nutrients in the soil.

My biggest surprise with Biochar was the need to prep it before using it. This incorporates your active living microbes in your compost or worm castings within the pockets of air that are in the biochar. Once I learned this important step from Rob  I made a video (kind of long – sorry about that.)

So Biochar is better when  “charged” before its first use. It is not good enough to  distribute the charcoal fines on top of your soil because like an empty egg shell biochar is a vessel waiting to be filled with nutrients and biology. Like compost, biochar is  electrically charged so it easily attract minerals once it is incorporated with mineral rich  compost or soil. I have found that over time Biochar has changed my Cation Exchange Capacity in my greenhouse soil. This is amazing because the soil I have is almost pure sand with just a bit of compost. Major changes – like CEC (or some people call it TCEC for total cation exchange capacity) are huge. Josiah Hunts paper (The Basics of Biochar: A Natural Soil Ammendment) tells me the effect on CEC is long-lasting (see quote below.)

THE MOST IMPORTANT MEASURES OF BIOCHAR QUALITY APPEAR TO BE HIGH ADSORBTION AND CATION EXCHANGE CAPACITIES AND LOW LEVELS OF MOBILE MATTER (TARS, RESINS). Initially my greenhouse soil has a CEC of 10.5% After adding Airterra Soilmatrix Biochar my greenhouse soil CEC was boosted to 31.8. Almost triple nutrient holding capacity from before!

“COMPARED TO OTHER SOIL AMENDMENTS, THE HIGH SURFACE AREA AND POROSITY OF BIOCHAR ENABLE IT TO ADSORB OR RETAIN NUTRIENTS AND WATER AND ALSO PROVIDE A HABITAT FOR BENEFICIAL MICROORGANISMS TO FLOURISH.” Glaser et al 2002. Lehmann and Rondon 2006. Warnock et al 2007

Simpler than Charging: Just add it to the compost pile

If you want to skip the  “charge” step with  your biochar you can simply mix it in with your compost as you make it. If you buy already charged biochar you have to use it up quickly or the microbes captured in the heart of the biochar will starve or die from lack of oxygen from the plastic bag you are keeping it in. So to make it simple on yourself simply add biochar to your compost pile as you make new compost. and use it when it is ready – or within a couple of weeks.  This way the biochar becomes incorporated with the nutrients and microbes as you make your compost. Rob suggests you gradually add about 10% by volume  to your compost bin. This way it will be incorporated into the pile as you build it. Gardeners care for their environment from the smallest beneficial insects to the microbes in the soil.

Remember if you make your own biochar you have to be particular about temperature reached, particle size, percentage of ash to char, resins and the method you will use to capture methane so you are not adding to the global climate change problem. If used correctly, the book Terra Pretta suggests an increase in permanent organic mater (such as biochar) will and does improve the environment. For every 1% boost in OM in a 100 square metre garden, Terra Pretta says you remove a tonne of CO2 from the atmosphere permanently. The book Terra Pretta offers all kinds of insights into biochar and climate change.

There are so many fantastic books and articles about biochar and this little article is not meant to replace or in any way compete with all the good information out there. I just want to raise awareness among gardeners because I really do believe in this product and love what it stands for.  Help yourself and help the world. It is a fantastic thing to do.