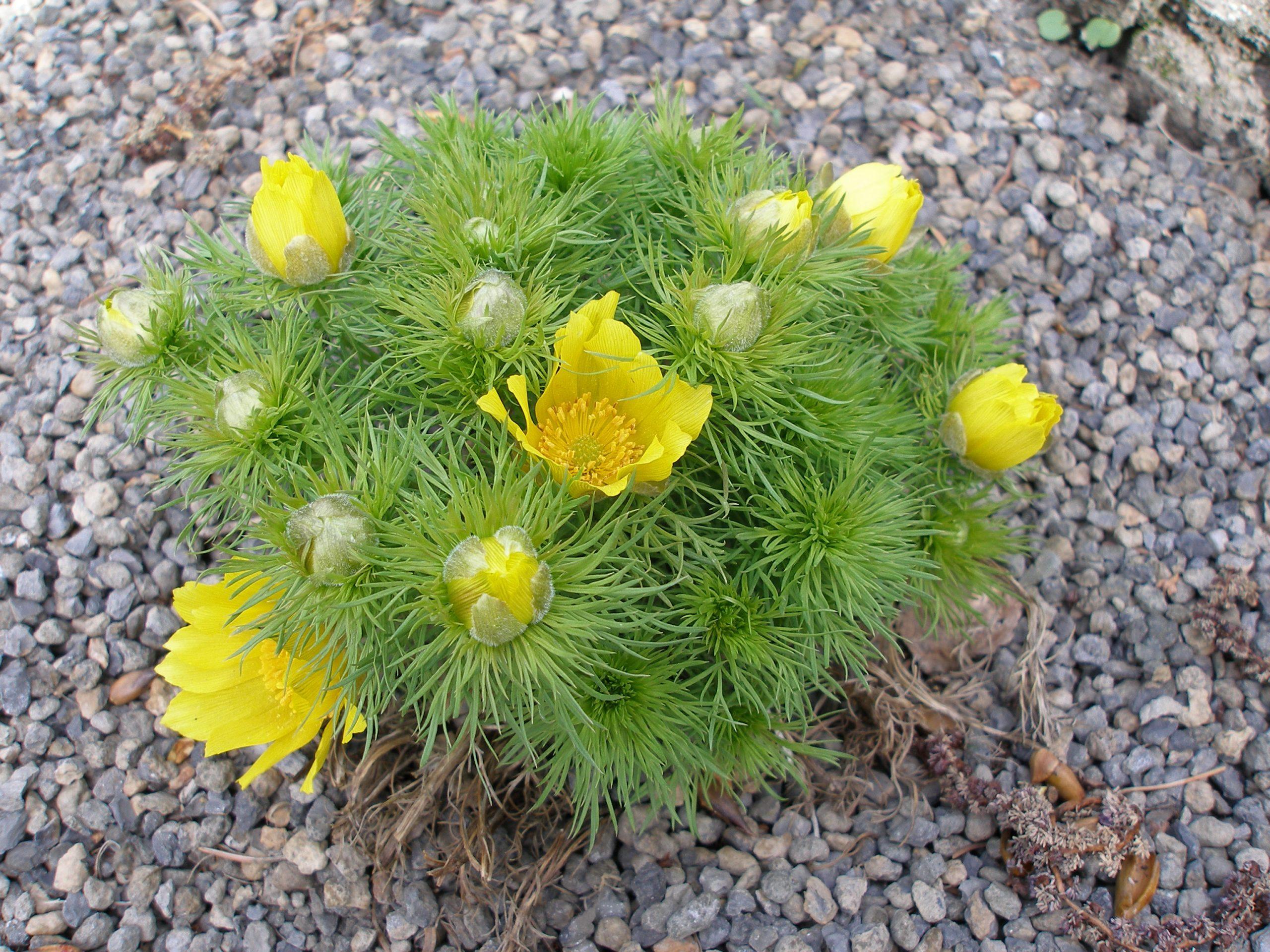 It’s Been a Long Winter: Add Colour to Your Garden

When my friend Janet was the gardener in charge of the Reader Rock garden in Calgary, Alberta, she sent me this photo of Adonis vernalis, blooming in late April.

This little plant, almost certainly stolen from the garden well before Janet’s time, was  gone from the garden a long time. The Adonis was probably “taken” from Reader, a public park, in the 1950’s or 1960’s and didn’t find it’s way home until a keen Calgary gardener spotted it in Calgary’s Mount Royal area. 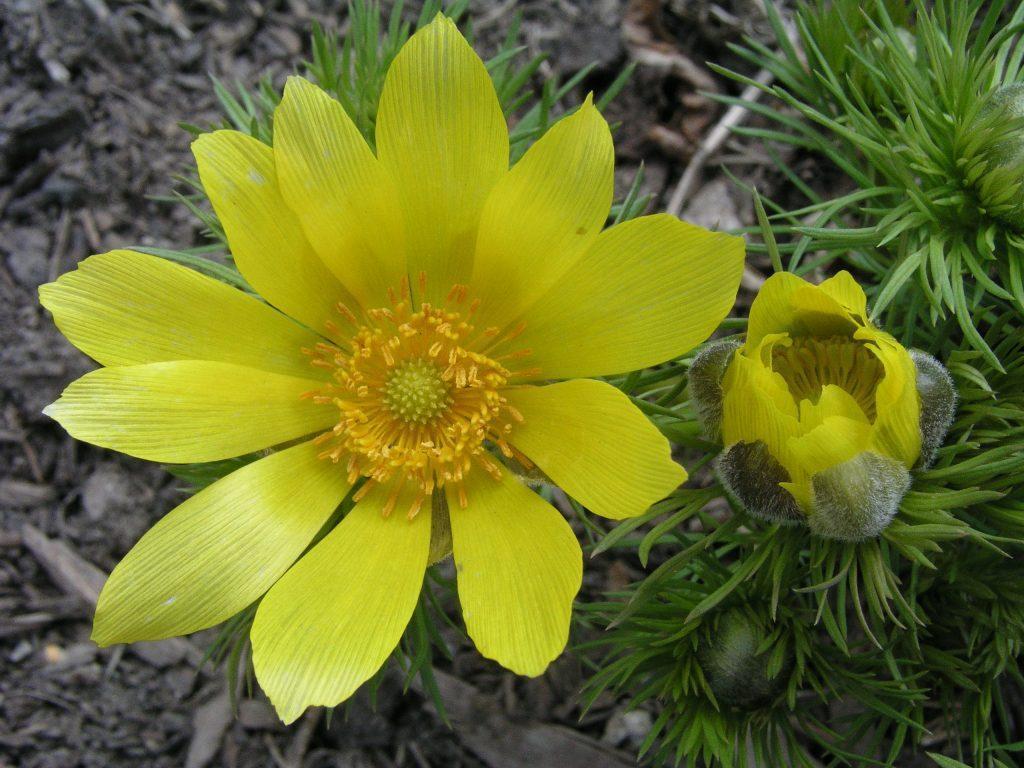 Brilliant yellow Adonis blooms sprout early in northern gardens and dazzle everyone with their colour and ferny foliage. Donna Balzer photo. (Cover photo of Adonis vernalis is by Janet Washburn)

Decades after the flowers went missing, alpine specialist, Sheila Paulson, was driving around when she spotted the Adonis in bloom in a front yard. She stopped in, identified this unusual bloomer and suspected it was one of the missing rare plants on the original list at the nearby historic Reader Rock Garden. Luckily, unlike a Picasso, plants are easy to propagate and share.  Sheila asked for a piece, then multiplied and planted this beauty all over her garden and all around the city. She shared it with members of the Calgary Rock and Alpine Club (CRAGS)  and with gardeners everywhere, including Janet at the Reader Garden. 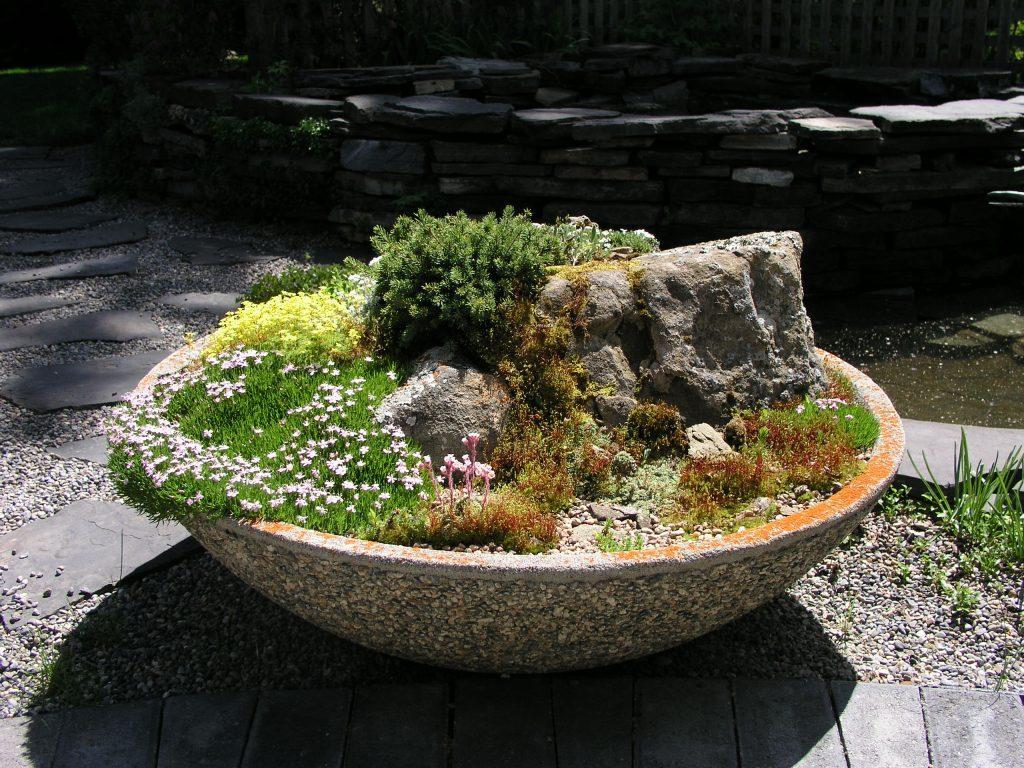 Sheila’s personal garden is often featured on bus tours and has become a go-to place for alpine enthusiasts as she tests and trials many exciting plants. I interviewed Sheila and other members of the CRAGS group extensively for my Prairie Rock Garden book in 2005 and my daughter Chelsie Anderson is currently Sheila’s private gardener, nurturing and caring for the exceptional collection Sheila has built.

When I was part of the team rehabilitating the Reader garden over a decade ago, Sheila was quick to take cuttings from her own plants and donate them back to the garden, helping us rebuild our collection. 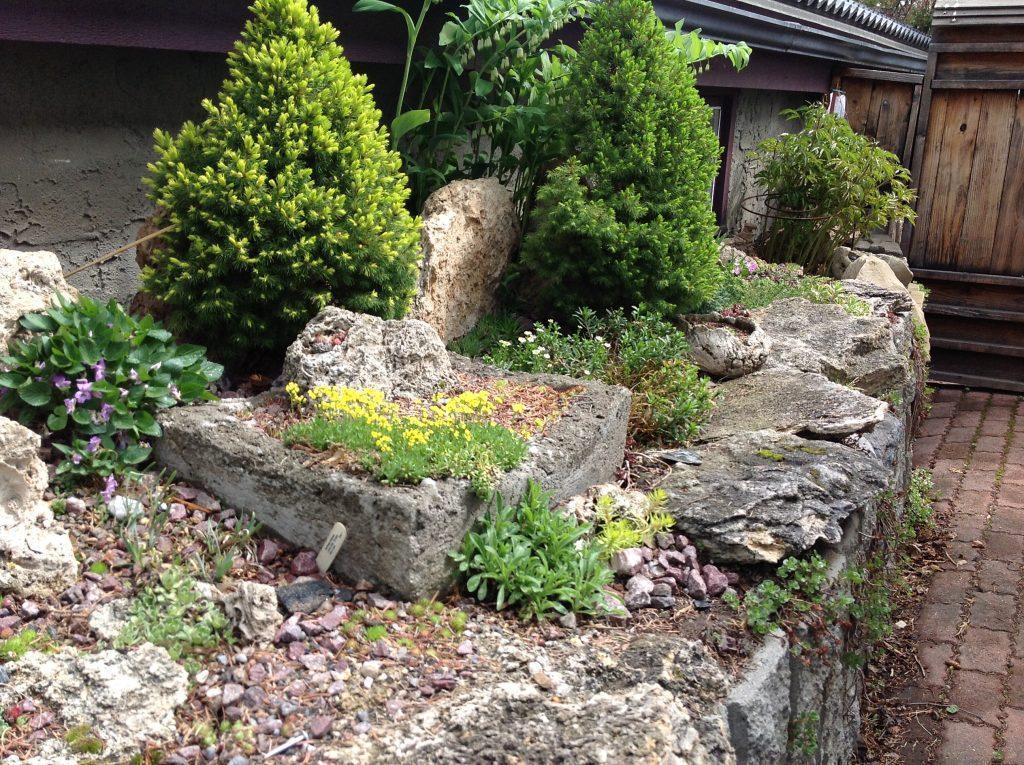 A small side yard complete with alpines and evergreens charms and delights gardeners and visitors in the early spring garden. Note the Tufa trough inserted into the already raised alpine garden. Alpines bloom early and are a delight even in the coldest climates. And they never go out of style. Donna Balzer photo. 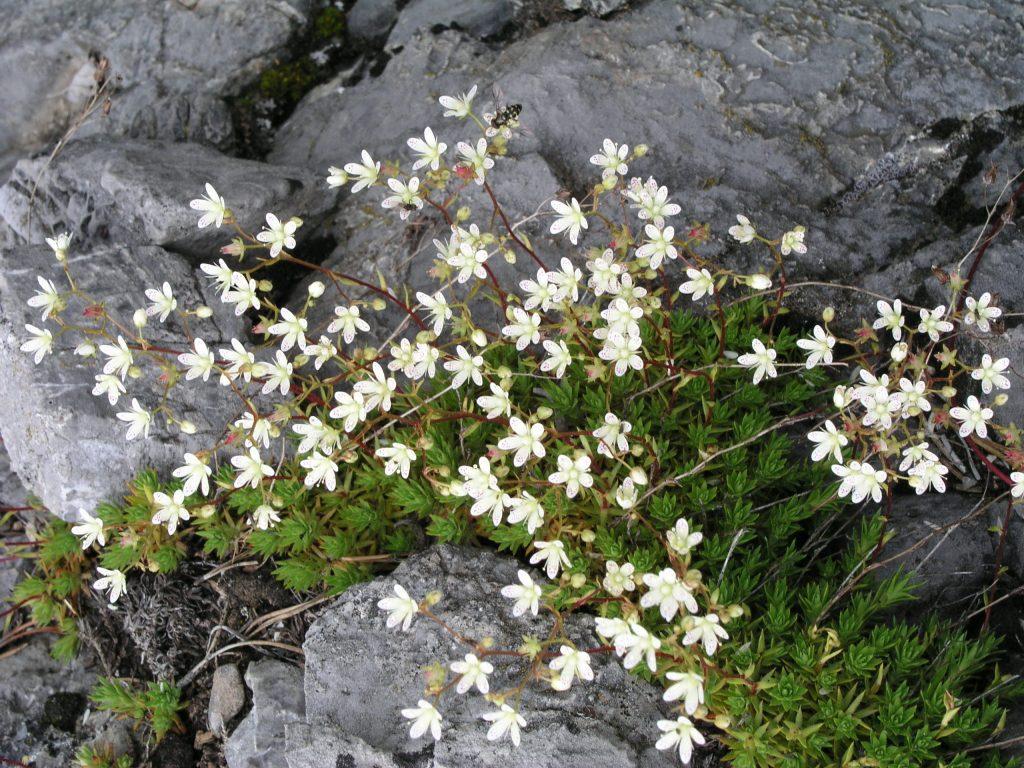 Not every alpine is planted. Here, Spotted Saxifrage is in the wild in a natural rock outcrop at sub-alpine elevation near Bragg Creek Alberta. These delicate alpines were photographed in the wild by Donna Balzer.

I mention Adonis and other alpines because there are a lot of unusual and hardy alpine plants that will grow almost everywhere in cold climates at almost every elevation and in almost any soil.  Sadly, so many alpines are so little known that the common garden centres just don’t carry them. Lets start demanding unusual plants and forget about the heavily marketed “winners” everyone is selling. If you belong to an alpine garden club you probably have rare plants of your own to share. Let me know so I can spread the word! Man cannot live by tomatoes alone. We all need a little beauty in our life. And with experienced gardeners like Sheila doing drive-by plant i.d. we are in good hands. 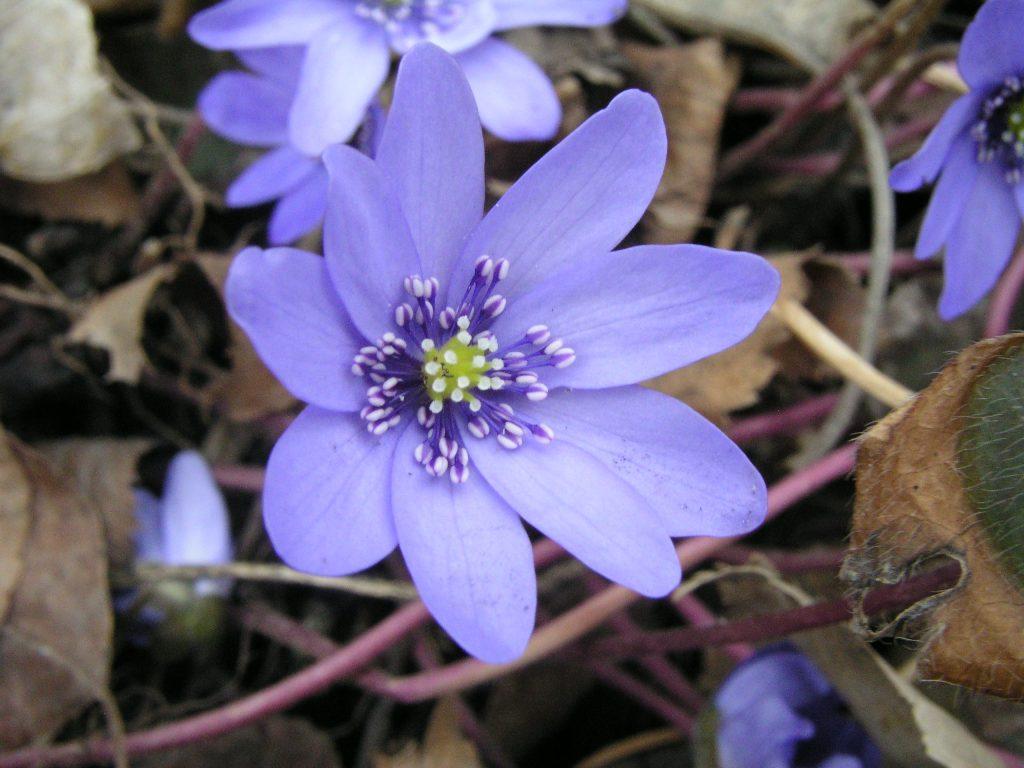 Close-up of Hepatica – a favourite alpine plant usually first to bloom in cold climates. Expect it in bloom by the end of April

Don’t forget to keep track of the blooming dates of all your early perennials and shrubs in your journal. Have you had any blooms yet? The first blooms everywhere is usually Hepatica and you can see it in gardens as soon as the snow melts in April. In warmer coastal climates the snowdrops might bloom earlier. 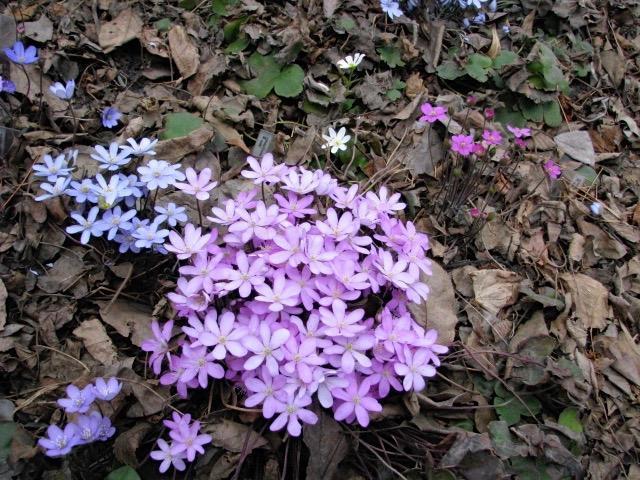 May 4 Calgary – Hepatica in a variety of colours.  This plant is always low-growing, hardy and early blooming. It is perfect for forest understory or alpine gardens.